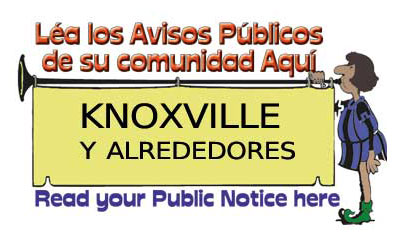 Meet your favorite “Star Wars” characters without making a trip to a galaxy far, far away.  This Saturday, March 22nd, from 10:00 a.m. until 2:00 p.m., Knoxville Zoo will bring the big screen to life for Star Wars Character Day.  (Special thanks to the MidSouth Garrison of the 501st Legion, the preferred costuming organization of Lucasfilm Ltd., producer of the “Star Wars” film series, for joining us.)

Famous “Star Wars” characters including Luke Skywalker, Stormtroopers and Sandtroopers will be meeting fans and posing for photos in the zoo’s East Tennessee Plaza and roaming throughout the zoo.  Visitors are encouraged to wear their own “Star Wars”attire to celebrate the occasion.  The opportunity to meet “Star Wars” characters is included with general zoo admission and free for Knoxville Zoo members.

May the Force be with you,

Contribution to Mundo Hispano Bilingual of

The City of Knoxville is in the process of developing the 2014-2015 Annual Action Plan for the proposed use of Community Development Block Grant (CDBG) and HOME Investment Partnership Act funds during the fiscal year that begins July 1, 2014. A draft of the document will be available for public comment beginning on Monday, March 17, 2014. The final version is due to the U.S. Department of Housing and Urban Development on or before May 15, 2014.

At this time, the Department of Housing and Urban Development, HUD, has not notified the City of the amount of CDBG and HOME funds it will receive for the 2014-2015 program year beginning July 1, 2014. It is estimated that the City will receive similar amounts of CDBG and HOME as last year: $1,470,637 in CDBG and $779,172 in HOME funds. HUD has notified the City that it will not be receiving Emergency Solutions Grant (ESG) funds for program years 2014-2015 and 2015-2016. ESG funds of $10,117 from prior years will be reprogrammed. The City also anticipates receiving approximately $150,000 in CDBG program income and $696,000 in HOME program income. HOME funds to be reprogrammed are approximately $1,000,000.

The City of Knoxville encourages citizen comment on the draft plan. The plan will be posted on the City’s web-site at http://www.cityofknoxville.org/development on Monday, March 17, 2014. Copies of the plan will be located at the following locations: Community Development Department, 5th floor, City-County Bldg., 400 Main Ave.; Lawson-McGhee branch of the Knox County Public Library; the main office of the Knoxville-Knox County Community Action Committee, 2247 Western Ave; East Neighborhood Center, 4200 Asheville Hwy and the South Neighborhood Center, 522 Maryville Pk. Citizens may also obtain a copy of the draft plan by calling the Community Development Department at 865-215-2120.

All comments must be received no later than Monday, April 15, 2014.

FRIENDS AND FAMILY SALE: TAKE 40% OFF SITEWIDE! USE CODE: FRIEND40

Joaquin (El Chapo) Guzman has been busted by Mexican Marines in the desert/Pacific Ocean resort of Mazatlan, Mexico. El Chapo (Short for Chapparito, Shorty) is ranked as one of the richest men in the world by Forbes magazine resulting from myriad illegal narcotics manufacture, growing, distributing and selling throughout the United States of America, Europe and the United States of Mexico.

Using as his base one of the world’s finest agricultural areas in the Pacific Mexican state of Sinaloa and its principal city of Culiacan (Kool-ee-ah-kahn) an ancient city founded by the Aztecs on their odyssey south from the Bering Sea, El Chapo grew his gang of “narcotrafficantes” (drug dealers) from a handful of farmers to a sophisticated army of murderers, brilliant logistical thinkers and a gaggle of financial experts that have contributed to his personal fortune.

Every American junkie puts money into El Chapo’s pocket with almost — every marijuana cigarette they smoke, every snort of cocaine up their noses, every dose of crystal meth amphetamine and even some of the heroin they shoot into their veins.

American, Mexican, Cayman Island and Swiss bank accounts of Chapo’s are awash with his money as well as U.S Treasury notes and bonds his drug money regularly buys. His revenues are unprecedented in criminal history. The Sicilian Mafia has never equaled the revenues or murders of El Chapo; the Mafiosos are amateurs in distribution of contraband, in its quantity and quality and availability to every drug user in the U.S.

El Chapo has built a multi-national drug enterprise that sprawls throughout the 450-million people of North America and the millions of Europe without the benefit of a Harvard business degree; in fact, El Chapo has nothing more than a third grade formal education.

Drug trafficking expert Patrick Radden O’Keefe of the Century Foundation and New Yorker Magazine estimates that El Chapo’s cartel supplies up to 40% of all illicit narcotics in the United States with no other cartel or “Muslim Afghanistan/Bekka Valley/Pakistan” drug traffickers of the poppy and its resultant heroin coming close to that 40% estimate.

Chapo pioneered the construction of drug tunnels under the American border, the use of “submarines” to bring merchandise north and single file processions of Mexican men carrying his merchandise across the desert and mountains in duffel bags and backpacks; he did this two decades ago

The traditional method of cross-border drug trafficking of passenger cars, one kilo per car of some of the 50,000 cars-a-day and 650,000 commercial trucks through the busiest port of entry in the world between Tijuana, Mexico and San Diego, California ended mostly when the US deployed hundreds of trained drug sniffing dogs.

The Mexican economy has benefited thanks to the drug habits of millions of Americans who plow billions into illicit drugs. From the grower of cannabis plants in the mountains of Sinaloa, Sonora and Chihuahua to the people (mules) who back pack drugs across the border under the noses of the Border Patrol to the drivers who pick up the “merchandise” on this side of the border and drive it all over the country, thousands of people are involved.

One recalls a San Fernando Valley/Los Angeles warehouse bust that occurred some years back that contained tons, repeat, tons of cocaine awaiting processing into tons more of retail merchandise for the Los Angeles/Orange County/San Diego/Las Vegas market, the largest and richest cocaine market in the world. That bust occurred because honest Mexican and American drug cops joined forces.

The same occurred in the bust of El Chapo. American Drug Enforcement agents and U.S. Marshalls joined Mexican federales to track Chapo and watched as Mexican Marines made the bust without firing a shot.

The Mexican Marines (Infanteria del Mar—sea-going Infantry; or Cuerpo de Marinos – Marine Corps) are used because they are most effective in arresting drug kingpins. Why? In contrast to Mexican Army  officers that are garrisoned in static “camps” and are well known at the local level they are easy to bribe, the Marines are stationed in Vera Cruz and are loaded up in planes and flown to target areas without anyone knowing the destination or target except for maybe the President of Mexico and a handful of people around him including the Mexican Navy Admiral who commands the Marines.

As Chapo has been indicted by several American state and federal grand juries, extradition is possible due to the fact that Chapo was in a Mexican prison a decade ago and escaped by bribing a gaggle of prison officers so he could be rolled out in a laundry cart and truck.

If the US State Department is smart, they will arrange a special cell at the Florence, Colorado “Super Max” prison from which no one will ever escape. All participating in the bust of Joaquin “El Chapo” Guzman deserve “atta boys,” including the President of Mexico whom everyone thought would ease up on the war on cartels started by former President Felipe Calderon eight years ago.

Of course, Mexican bodies will pile up even higher now that Chapo is out of the picture. His competitors and his own people will fight it out for control of the billion dollar business.

Supply and Demand is the irrefutable law involved – that is, all American junkies know or care about, they have the demand, someone has to have the supply.          ###

Contreras’ books about the Mexican drug cartels, “Is Mexico Burning?” and a novel, “Juniors”, are available at amazon.com